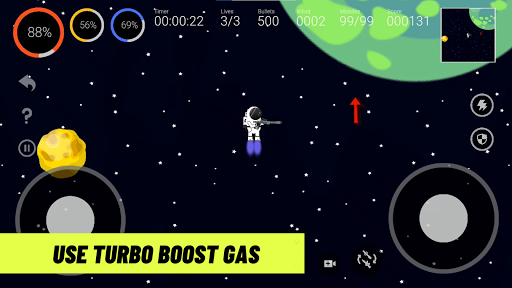 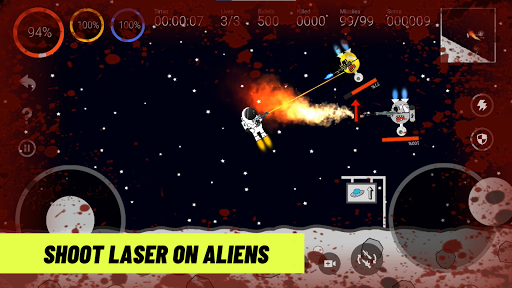 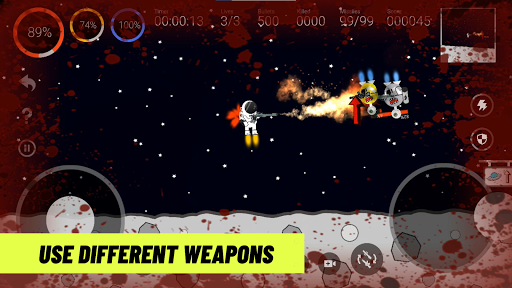 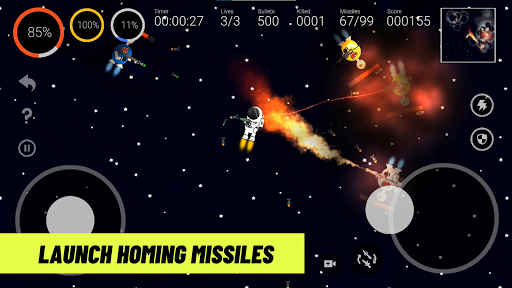 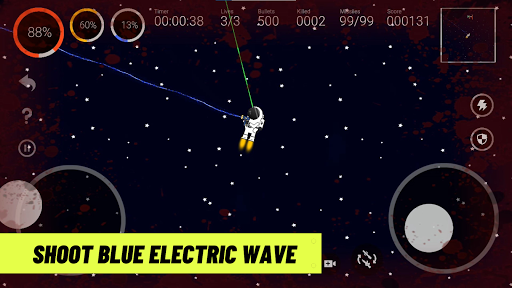 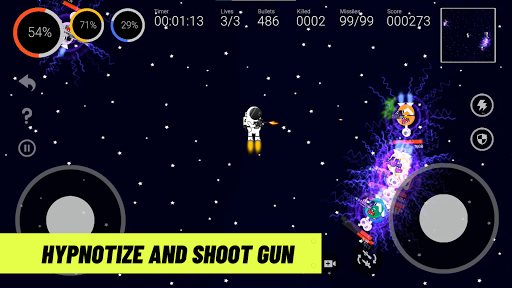 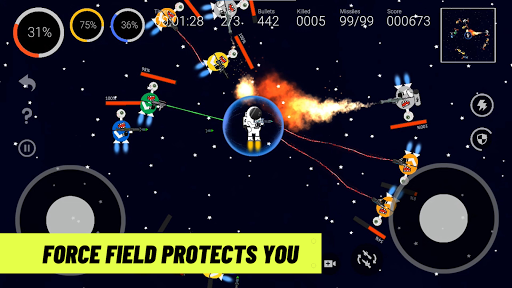 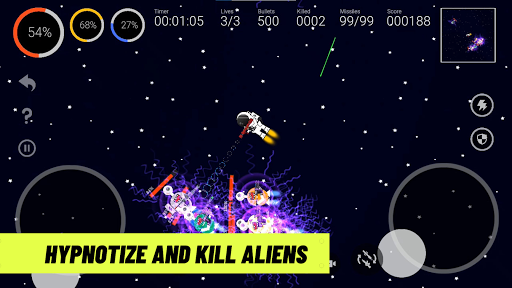 Fatal space is a 2D action and space shooter game. So, what you have to do for playing and enjoying this action-adventure and space game?

✔ Defend space from aliens. Play around with the adventures of space shooter game mechanics and fly up with the help of flying shoes.

✔ Save space from the stupid aliens. Can see an Alien every 20 seconds. Kill aliens and their UFO to save the astronaut and win the space battle.

✔ Face all the challenges and defeat all 5 UFOs. Limited lives to protect the astronaut make sure aliens could not beat you!

✔ Five types of aliens each alien can perform different actions in the whole game. So, don't miss the chance to shoot them in one shot.

✔ Switch weapons in the bottom center button and use the weapon wheel for the shooting aliens. Also, choose the weapon according to its need.

✔ Use the turbo gas for flying with a high speed as upward in the space as compared to normal flying.

✔ Enable a force field whenever an astronaut finds himself in a problem and it will protect him from the aliens for 15 seconds.

✔ Ensure to kill all the UFOs once otherwise aliens will keep coming out and decrease your health and lives then eventually you will lose.

✔ Have only three lives each life gets decreases when health reduces to zero. When it reaches zero an astronaut will die and the game will be over.

✔ Don't forget to destroy all the UFOs and they could be died by the astronaut's laser, electric wave, machine gun, and flamethrower. Use it wisely.

✔ Take benefit from all missiles and bullets, which makes this space shooter game more interesting. Flamethrower gets decreases when it will be used and it automatically refills again along with the time goes.

✔ Continue the game until all the UFOs and their enemies die. After killing all the aliens and UFOs the astronaut gets to win.

✔ Hypnotize for few seconds using sound waves is also a great mechanic of this space game. So, use it anytime and the result of this that aliens cannot do anything like shooting, chasing, damage.

✔ Homing missiles usually kill an alien by finding his path. This means an alien's missile can find too, and decrease health.

✔ Flamethrower can kill aliens and UFOs, and therefore it decreases when it's used too much. After some time it refills again. In addition, a flamethrower decreases alien's health rapidly compared to other weapons.

✔ Electric guns and laser work almost the same both can shoot and destroy aliens and UFOs. A machine gun can also shoot both AI's (Aliens and UFOs) all weapons have their own uses and each alien has the same weapon which the player owns.

And, it's not an end, We are looking forward to getting feedback from all of you! Please leave your reviews, then we will surely keep improving this game even better.

Contacting us?
If there are any questions, you may contact us using the information below.
RONAK INTERACTIVE
ronakinteractive@gmail.com jsbebbJIcl